In Episode 61, “Alive on South Beach” goes to NATPE (National Association of Television Production Executives), which is basically an industry convention, however because NATPE is a marketplace for buyers and sellers of television programming content, the events are sprinkled with star-studded glamour. And this year drew many – such as Norman Lear, Howie Mandel, John Tesh, Kris Jenner and Todd Chrisley.

While at the Award Ceremony, Stewart had a conversation with  Todd Chrisley who for the second year in a row, won the NATPE award for Best Cable Reality Show “Chrisley Knows Best”.* 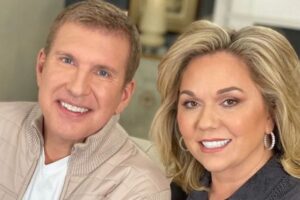 Please note that this warm and fuzzy interview took place before Todd Chrisley and his wife Julie were arrested for bank fraud and tax evasion (in November 2022). Todd was sentenced to twelve years in prison and Julie was sentenced to seven years for her involvement.

In a larger forum, Kris Jenner talked about the importance of sharing her family values for others to learn from. While we were there, Stewart interviewed Daniel Elbittar and Rosmeri Marval, stars of Entre Tu Amor y Mi Amor telenovela.

At the Miami Book Fair International, Stewart has a sit-down conversation with Gerald Posner about his pit bull style of journalism, as well as his new book, and his relationship with his wife Trisha Posner.

And at Taste of the Garden, in addition to sampling the culinary delights, Stewart talks with Sandy Shapiro – Executive Director of the Miami Beach Botanical Garden and event coordinator, as well as event goers and presenters.

Also, Dr. Carol Hoffman-Guzman, Executive Director of Arts at St. Johns, talks about “The Journey” a musical that is part of a program relating to “Places We Call Home”. Author Ruth Behar joins conversation.

“Alive on South Beach” is seen on internet platforms all over the world, including China. 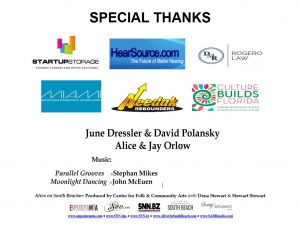 THE BUTLER DID IT!

MIAMI OFF THE PAGE