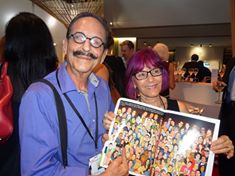 As the camera-person and video editor, I have the luxury to study the actions, reactions and interactions between Stewart and our on-camera guests. I get to see their warts and hear their nervous chatter. I also witness them being charming, interesting, informative and entertaining. My peek behind the scenes leads me to say that every character and every episode of Alive on South Beach is unique, passionate, engaging and real.

This episode of Alive on South Beach (#60) opens with a shout out from Todd Chrisley (self-made millionaire star of the very funny USA Network television reality series Chrisley Knows Best).

As we do every year, Stewart and I went to Art Basel|Miami Beach and its satellite fairs. The paintings and installations, photographs, furniture, murals and sculptures, always generate stimulating conversations about ART and what is subjective, objective, and from what perspective. But even more fun are the colorful people who ARE the SHOW (Sylvester Stallone, for example at DesignMiami/Basel), and the generosity of some of the hotels that give the locals an extra Art Basel treat, such as the Sagamore Hotel and its annual Art Basel Saturday Brunch.

And, as we also do every year, Stewart and I went to the 32nd Miami Book Fair International where we met an assorted bunch of authors. In this episode, Lea Black, known for her role in the Real Housewives of Miami, as well as her star-studded charity event The Blacks’ Annual Gala, talks about her must-read gossipy novel, Red Carpet/White Lies. And, while we were at the Fair, we ran into President Obama’s Inaugural poet, Richard Blanco. 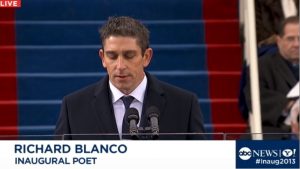 Of course, with events such as the Hess Select Miami Beach Sea Food Festival and the 19th Americas Food & Beverage Show and Conference in town, Stewart and I tasted some delicious food.

We also stopped by to wish Harvey Burstein congratulations on the 10th Anniversary of MiamiArtZine.Com.

We end our show with a shout out from the one-and-only Mitchell Kaplan, Producer of the Miami Book Fair International and owner of Books & Books.

Future episodes of Alive on South Beach will feature some of the other authors we met at the Fair.

Thank you Brigette Andrade for including us in your Miami Beach Centennial collector’s edition Comic Book, The Adventures of Bibi & Friends.

Some of the authors we spoke with about their books include, but are not limited to: 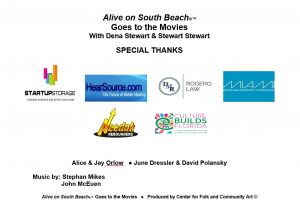 Love Is All You Need?