Sometimes I have things to say, and sometimes my friends say it for me. In this “blog” Barney Rosenzweig had the stage and page.

It has been a long time since I have written something … anything… for a website. Maybe it is because folks refer to it as a “blog” – such an off-putting noun.

So I will refer to my writings as “notes” and these particular notes are my reviews of the Broadway shows my wife, Sharon (Gless) and I saw during a recent weekend in New York; going to New York theater is something we usually do three times a year. 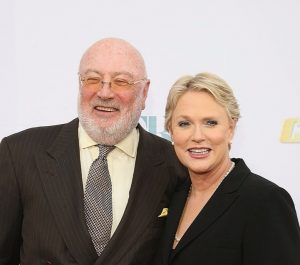 Just an aside, for nearly three weeks before our NY theater spree, Sharon was in Bali… on a sort of spiritual quest… in the company of her niece, Bridget Gless-Keller. Sharon, who already possesses more spirituality than her husband ever will, mostly enjoyed the time of re-bonding with Bridget, her favorite (and let’s face it, only) niece. She flew over 25 hours to rendezvous with me in NY so that, in addition to the theater, we could attend the Fourth Annual Lapham’s Quarterly Decades Ball, the Lapham Quarterly being a most erudite publication. Tyne Daly and Ralph Nader were at our table. It was great fun.

Now, my commentary, in chronological order of when we saw each show. I hope that someone out there will find what I say interesting. Feedback is required.

On the 20th Century starring Kristin Chenoweth who very well may be the finest comedienne anywhere near the Broadway stage or in America today. The show is nicely mounted, has a decent supporting cast, but the only reason for seeing this chestnut is Ms. Chenoweth. She sings beautifully, looks great and is simply too funny in this part for me to properly describe. Do not bother to see this show after she leaves.

The Audience starring Helen Mirren. Ms. Mirren is a great actress. No one disputes that, but I would guess there are others who could replicate what was accomplished here by her. What was quite impressive to me was the extraordinary job of staging and direction along with the miracle of

costume and wig changes right on stage in full view of the audience into which Ms. Mirren would mold her body into the age of the Queen she was portraying always in sync with the now author’s concept of presenting Elizabeth, the Queen, out of any sort of chronological order. The end of act one, the coronation of Elizabeth, was stunning and surprisingly (to me) moving. I couldn’t wait for act two to begin which brings to mind the cliché of being careful what you wish for. If only I had left the theatee at Intermission and not gone back for that long and repetitive second act, I would have/could have held The Audience in so much higher regard. 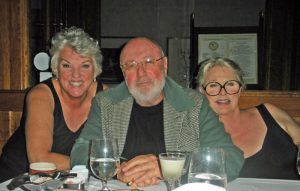 It Shoulda Been You stars Tyne Daly and a very good supporting cast. Sharon had seen it once before in rehearsals giving support to her “partner” in rehearsals.  I had seen it over a year ago in an out of town tryout somewhere. Was it in New Jersey? Tyne, as the mother of the bride is, as always, terrific. The show is charming. An old-fashioned solid evening’s entertainment in the theater. Both times I saw the show I have to confess to longing to see Sharon Gless as the mother of the groom, the nemesis to Daly’s Mother of the Bride. I easily imagined (as perhaps only I can) how much more fun it would be to see those 30 years of history bouncing off each other, but this time live on stage. I mean no disrespect to the very competent Harriet Harris who plays the part beautifully… there is just no one, anywhere, who could bring more to this dueling duo as written than the re-teaming of Gless and Daly. Oh yes, Chip Zein, who plays Tyne’s husband in the piece was our Assistant DA for a time in Cagney & Lacey.

Fun Home won the Tony for best musical. It is very smart and dark, very original, and if you can’t make it to Broadway, buy the CD which has it all…. dialogue and songs…with nothing (that I could figure) left out. I am an old guy. This piece merits a lot of praise and a lot of awards, but if it’s a musical than… well, I just don’t know. It is almost more of an opera… and might actually be one if there were truly an aria rather than just recitative. Of course it could be a musical if there were truly a song… which there is not. I have a good ear for music. As a three year old child I could sing the entire score of The Mikado. I can still hang in there with a battle of the hit tunes from Broadway over the past 50-60 years with Tyne or any number of other musical mavens. I have seen Fun Home and I have listened to the CD. It is powerful, it is good, but I cannot remember three notes of any of the songs. I think that is a problem. Obviously the Tony voters disagree.

The King and I at Lincoln Center. Bartlett Sher, the director and the Center leaders and staff deserve the billing right there next to the title. The King and I is (arguably) the best musical ever…EVER… written. Lincoln Center does it proud. Instead of the 10 to 15 piece pit band prevalent all over the Great White Way, the not-for-profit Lincoln Center presents us with a veritable orchestra of over 30 pieces. The curtain is not your standard-use-for-every-show asbestos thing, but rather a massive silk screen in cardinal and gold depicting a Siamese-like scene. The cast, the sets, the costuming are all perfection. Kudos to the Lincoln Center. I did not think they could top what they accomplished (by the same director by the way) on South Pacific, They have, surpassing even themselves. Kelli O’Hara soars as the English tutor and the remainder of the cast hangs in there with her. I am not ashamed to say that I had my handkerchief in hand through the entire show and it was very damp with tears at the final curtain. Bravo to all … and Brava Ms. O’Hara.

An American in Paris. We saw it the very next afternoon and it is probably most unfair to see anything after The King and I. The matinee was before a packed house at The Palace, the largest theatre on Broadway. The sets were imaginative in design and for the most part in execution, the Gershwin score includes some of the best American music and song ever composed. What then is wrong? Well, you have to begin with the script. The story is certainly solid so to what do I refer? In The King and I, the characters break into song because there is nothing left for them to say. They simply must sing… to evoke their emotions, to explain themselves, for… well, for whatever reason. It is organic. It is necessary, an essential part of the whole. In An American in Paris, people sing because there is a vast library of good Gershwin material that should be presented. It just doesn’t come out of any real feeling or anything organic. It is, what they call in the trade, a juke box musical. Doesn’t matter how good the juke box is, it is hard to get past this flaw in the play itself… especially when one has just seen perfection at the Lincoln Center.

Later, the same evening, we saw On The Town. Now this is interesting… vintage Leonard Bernstein. Not his best (West Side Story would have to take that bow), but damn good nonetheless. Unlike An American in Paris it is not a collection of song book hits, but rather a musical play with dialogue that leads the actors… oft times compelling them… to sing. And sing they do… and dance…. and act… and they accomplish all of that in a matter superior to what we had seen in the afternoon. I found myself wishing that An American in Paris had waited for On The Town to close so that they could take that cast on the rebound. Better yet… Give it to Bartlett Sher to stage it all at Lincoln Center.

Let me summarize Friday night, Saturday afternoon and Saturday night. First was Rogers and Hammerstein at their best, next was Gershwin cannibalized by lesser talents and not at his best in any event, for that would have to go to Porgy & Bess, and then there was Bernstein. As stated, very good, but no West Side Story (although some of the rifts in this earlier work sound somewhat West Side familiar).

Exhausted Sharon and I limped out of town the next morning, catching the Jitney to Bridgehampton and a few days with friends before hightailing it back to Miami and Fisher Island. Home sweet home.

Barney Rosenzweig is a television producer, best known for his 1980s television series Cagney & Lacey. He also produced the 1960s series Daniel Boone, as well as a dozen episodes of Charlie’s Angels.

In 1991, Barney married the Cagney & Lacey star Sharon Gless (Sgt. Christine Cagney). (Ms. Gless is also known for her roles as Madeline Westen on Burn Notice and as Debby Novotny on Queer as Folk.)

Barney subsequently created and produced The Trials of Rosie O’Neill (starring Sharon Gless). The show ran for two seasons in the early 1990s. He is now retired and loving every minute of his spare time, which he has very little of.

POLITICS AND THE MOVIES

Barney and the Rhinoceros

Donate Bitcoin to this address

Barney and the Rhinoceros